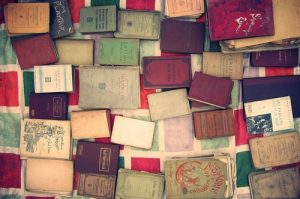 There’s only one thing that can rescue me from end-of-summer blues: the promise of some great new books for autumn. And this year’s list of has some real gems. Just have a look.

Loved, loved Normal People (30th August) by Sally Rooney. A good old-fashioned love story in brand new wrapping. If you’re wondering what it’s like to be young today, read this. And even if you’re not, this book will take you back to your own first fumbling experiences with love.

The Silence of the Girls (30th August) by Pat Barker is the story of Trojan War, immortalised in Homer’s The Illiad, but this time told from the female perspective. I’m a few pages into the book and already absorbed. If you liked Circe by Madeline Miller, which we adored, get this.

Haruki Murakami‘s new novel Killing Commendatore (9th October) is a Great Gatsby inspired love story. This will be his first novel since Colorless Tsukuru Tazaki and His Years of Pilgrimage, which we found to be a bit bland. Let’s hope it’s more in line with his engrossing 1Q84.

Melmoth (2nd October) by Sarah Perry, author of bestselling The Essex Serpent, is a gothic mystery novel set in Prague where our heroine starts investigating the history behind the mystical figure of Melmoth. Will Perry be able to follow up on her astonishingly successful second book?

Berta Isla by Javier Marías (4th October), one of Spain’s literary giants and one of our favourites. We loved his The Infatuations, A Heart So White and Venice, an Interior. A bit mixed early reviews for this love story between a Spanish woman and a British spy, but I might give it a try anyway.

Unsheltered by Barbara Kingsolver (16th October), author of the gripping The Poisonwood Bible, is the story of one house and two families who live 200 years apart. Her more recent books have been a bit hit and miss, perhaps this will be the one to match The Poisonwood Bible?

Becoming (13th November), Michelle Obama‘s hugely anticipated memoirs, should be inspiring although, personally, I’m going to be even more excited to read Melania Trump’s post-divorce memoirs when they come out.

First to be broadcast on BBC Radio 4, David Szalay‘s short-story collection, Turbulence, will come out on paper right before Christmas (6th December). It’s stories of 12 different people in transit around the globe, whose lives interconnect in some way or other. Few authors portray the modern male psyche quite like Szalay. We devoured his novel Spring and short-story collection All That Man Is.

American Weather (TBC) is Jenny Offill‘s third novel. We loved her first, Dept. of Speculation, a refreshingly original story of a marriage on the rocks. This one deals with mad families and polarised political opinions in contemporary America, sounds interesting and relevant. One to watch.

We would love to hear your thoughts on any of these books on our Facebook Page or in the comment field below. Sign up to Bookstoker Group Facebook page and make sure you don’t miss our posts or discussions.

That’s all for now! Enjoy.

‘All that I know about my life it seems, I have

‘One in four disadvantaged children across the UK has fewer than 10 books of their own at home.’ Please consider donating your children’s pre-loved books to the Children’s Book Project. Sharing the book love✨ @lonbookproject #Bookstoker
https://bit.ly/3zNWYaN

‘Escape to the studios of 1970’s New York, the courts of 15th century Paris or the deathbed of Francis Bacon.’ Art-inspired books to read this summer @royalacademy #Bookstoker
https://bit.ly/3OmXGjP