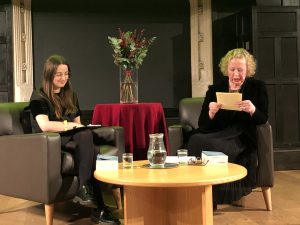 Lucy Ellmann is the most recent winner of the Goldsmith’s Prize, which rewards ‘fiction that breaks the mould or extends the possibilities of the novel form’. One of this year’s judges, New Statesman culture editor Anna Leszkiewicz, was in conversation with Ellmann at the 2019 Winter Cambridge Literary Festival.

Written mostly in a single sentence, Ellman’s novel Ducks, Newburyport stretches over a thousand pages. The narrative follows the internal monologue of a Midwestern American woman baking pies in her kitchen-turned-bakery. ‘You’re supposed to swim around in the stuff,’ Ellmann told Leszkiewicz. ‘It’s not something you just read in an hour and get rid of. You’re supposed to be stuck in there like she is.’

The phrase ‘the fact that’ is repeated throughout the book. Ellmann highlights that ‘you don’t know how it’s going to end; you start a sentence “the fact that Boris Johnson is a moron” or something, that could end in various ways.’

Ellmann’s soft voice does not prepare you for the issues she is willing to discuss: from motherhood to the terrifying reality of Trump’s America; the way that women have been terrorized by their husbands or the abuse we inflict on the environment.

Lucy Ellmann offers many insights into the threats that face our world today, and I am excited to read about all of them, every single sentence!

‘First you take a drink, then the drink takes a

‘Come and take choice of all my library, And so

‘It’s a new library opening in a school that’s never had one. It’s a family escaping into a story after being forced to flee their home.’ Please support the wonderful work of Book Aid International this Christmas✨ @Book_Aid #Bookstoker
https://bit.ly/3UytHrr

‘Tangier is not a place you visit only once. It will charm you, surprise you, make you want to look, then look again.’ Read your way through Tangier with Laila Lalami @nytimesbooks #Bookstoker
https://nyti.ms/3VciUEe