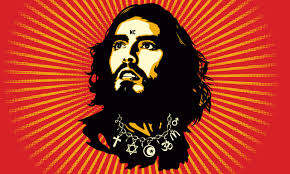 For those of you tempted to read self-styled revolutionary Russell Brand’s REVOLUTION, save yourselves the money and read this hilarious digested read by The Guardian’s John Crace instead.

John Crace reduces the call to arms from the comedian, actor and West Ham fan to a universe-shifting 600 words

So there I am being grilled by Paxo literally the most pant-shittingly scary interviewer in the world and he says what do you want and I say I dunno and he says you must know so I say I want to have a revolution and he says what kind of revolution and I say hang on dude I haven’t got that far yet what do you think I am some kind of philosopher I’m just an ordinary bloke from Essex who happened to take a load of smack a while ago and has talked about little else since.

Anyway I went home to a couple of chicks that’s one of the things about being a star you get all these chicks who want to fuck you and for a while it’s great but then it’s not but anyway back to these chicks and they also say to me what kind of revolution do you want and I say why don’t I flip you over and we try that kind of revolution but when I’m finished that’s not the kind of revolution I want either did I mention that I used to take tons of smack and steal stuff and it was all really heavy-weavy?

And that got me thinking about how I used to do a lot of drugs and now I don’t and I realised that what I really want is for everyone to feel the deep inner-connectedness that me and my mate Bob felt when he did thisayahuasca trip and channelled the spiritual transcendence of the planet Gamma before doing this mega Technicolor vom with tons of carrots over the yoga mat I’m not saying I believe the conspiracy theories about theCIA and 9/11 but there’s no smoke without fire and what about the third tower that never was you know what I’m saying did I tell you about my smacky-wack addiction and what I really think is that none of us is yet fully spiritually aware enough to understand the mystery of the deep mysteries of the universe.

Fuck off you thick talentless geezer who has prostituted himself on the high altar of celebrity I can hear you say shall I tell you about that time I was in the back of a limo with Tom Cruise on the way to the Oscars Ah Hollywood you brazen temptress you what do you know about revolutions why don’t you just take your skinny arse off and write Booky Wook IIIinstead of doing nothing less than trying to overthrow the whole of capitalism and I can admit I thought about it as I had already trousered a splendiferous amount of cashy-washy as an advance that in my previous soiled life as a heroin addict would have had my knobby-wob throbbing with anticipation.

As I write this Britain this failed concept of a country is on life support and the reason is money some people have too much of it and some people have too little and it’s not fair because that’s not what God wants I knowthat semi-conscious primate Dickie Dawkins thinks there’s no God but I know there is because I have been in touch with the divine ever since I looked in the mirror when I gave up drugs and he told me that money is a total bummer so what we need to do is get rid of all money and then everyone would have the same amount that’s not hard to understand is it there’s this new book by a bloke called Thomas Picketty Witch or something I haven’t read it because it’s a bit long and there was nothing about me in it but I’ve heard it’s quite good.

The Queen is just this ordinary chick so she needs to stop being a queen it’s quite tempting to kill her but my new karma won’t allow me to I will let her live after all as long as she pays her way with the money we won’t be using some posh tosser said I should read some Orwell so I did and what I discovered is that Young Eric was exactly the same as me apart from having taken the golden brown and he would have said Come on Russy Wussy baby, let’s hold hands get this revolution thing done by going on a journey to a oneness with the source of this groovy-woovy electromagnetic realm floating in the cosmos of nothingness and someness and maybe if we just say a couple of prayers and don’t vote then everything will be OK don’t hassle me I never said I had the answers I just want my own little revolutiony-wutiony and if I can make some money out of it so much the better let them eat gateauy-wateauy thank you.

A lovely perspective of Cecil Court, London, a boo

Should old age burn and rave at close of day? This

Feeling festive yet? Get in the mood with our Chri

A cornucopia of fiction, politics, science, children’s books and more ✨ Check out the best books of 2022 @GuardianBooks #Bookstoker
https://bit.ly/3F3jcX3

From the feel of a handmade tome to the cosy smell of old print, literary gifts that ‘challenge the mind and take you through every continent.’ @atlasobscura #Bookstoker
https://bit.ly/3B9MCBP

‘It’s a new library opening in a school that’s never had one. It’s a family escaping into a story after being forced to flee their home.’ Please support the wonderful work of Book Aid International this Christmas✨ @Book_Aid #Bookstoker
https://bit.ly/3UytHrr